The CPU’s clock is increased to allow for more calculations per second. As a result, more power will run through the connections at different intensities, causing the CPU to heat up more. As a result, the CPU will become hotter as more processes seek CPU time.

Cooling is a variable that influences the temperature of the CPU. At the high performance, the higher the cooling, the lower the Processor heat will be. However, the system becomes inefficient if the temperatures rise too high, and the hot parts are prone to fry.

Easy Ways to Cool Down a CPU

There is a slew of options for keeping your PC cool. You could upgrade to a more powerful fan with higher revolutions per minute, which means more airflow and better CPU cooling. Liquid-cooled fans are also available for more advanced fans.

Clean Out Your Computer

If your CPU temperatures are too high because you have an older computer or one located in a dusty environment, the first thing you should do is open it up and clean it out.
Dust accumulation, in your case, can degrade the performance of your system’s fans and limit airflow, prohibiting your CPU from receiving the cooling it requires.

Close the Case at All Times

It has long been contested whether keeping a computer system open is preferable to keeping it closed. It may appear reasonable because an empty casing allows more air to pass through, attracting more dust. But, on the other hand, a closed computer casing improves airflow while also keeping dust at bay. It also encourages and ensures that you will clean them less frequently.

Suppose your system is older, or you haven’t updated the thermal paste that connects your CPU to its fan. In that case, you may be experiencing greater temperatures due to the thermal paste’s degradation.
Remove your Cooling system and clean the connection point on the cooler and the back of the processor. I usually scrape off as much of the leftover thermal paste as possible with a razor blade, then wipe away the rest with a lint-free towel. For better scrubbing, soak the cloth in 90 per cent isopropyl alcohol.

Checking for any airflow obstructions is one of the simplest ways to reduce CPU temperature. First, check to see whether your computer’s vents are blocked. For example, the cooling fan on the back of the computer case exhausts hot air; ensure it isn’t covered or too close to the walls or cabinet. To allow for improved airflow, leave a 3-4 inch gap. Similarly, if you keep your computer case inside a desk with the door closed, the air inside the desk circulates and recycles, raising the CPU temperature. As a result, ensure sure the cabinet is sufficiently aired or that the door isn’t closed while the machine is running.

The majority of people overlook the significance of wire management in a computer. Cable management not only makes your computer’s interior seem friendly, but it also helps to keep the CPU cool. Cables take up a lot of room within a computer case, resulting in poor airflow. Tidying the line will help to improve airflow and lower the CPU temperature. 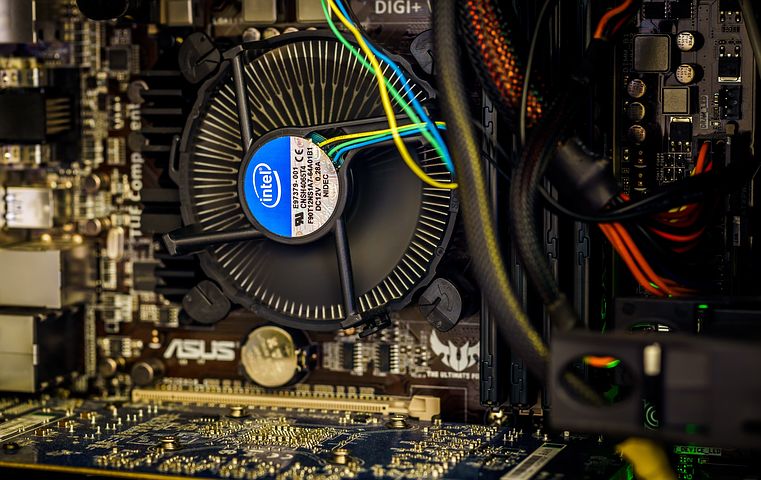 If you got a fantastic powerful computer, but your CPU temperature is still higher than usual, it could be due to a lack of airflow in the system. Your computer case is a closed system that requires airflow both inside and outside to operate at its best temperature. When a result, as the number of case fans grows, airflow increases, lowering CPU temperature. Two types of computer case fans are required, which you may need to modify. One draws in air from within the system, while the other exhausts hot air from the system. As a result, re-configuring the fan is essential for lowering the CPU temperature.

Water Cooling Kits are a preferred idea for up-gradation

The process of boosting the CPU’s synchronisation rate through BIOS settings is known as overvolting or overclocking. Given the fact that overclocking improves your system’s overall performance, it also raises its temperature. Overclocking equates to increased performance, which equates to increased CPU heat generation, resulting in increased CPU temperature. Overclocking your PC if you don’t have the most OK CPU cooling is a waste of time. To keep your CPU cool while overclocking, you’ll need the most excellent cooler available. So don’t overclock your CPU unless you have the most costly and effective cooler.

If the preceding is a little too hands-on for you, you may reduce CPU temps by decreasing the CPU settings in Windows, notably the maximum processor state.

Control Panel can access by right-clicking on the Windows start menu.
Choose Devices and Sound, Power Choices, and Edit Strategy Settings from the menu.
Start changing power management settings” by having to click on it.
Scroll down to Computer power management” in the Power Options box that displays, and click the plus symbol to expand the menu.
Expand “Maximum processor state,” then drop the Settings percentage to 80%, then hit “Apply.” You’ll see % for both”Plugged In” and”On Battery” if you’re using a laptop. As needed, adjust the settings for both.

Your CPU is one of the most delicate parts of your computer, and it has the most significant risk of overheating. Most CPUs come with low-end fans designed to keep your processor cool just long enough to keep it running—but no more. Consequently, you may want to consider investing in a better CPU fan to help lower CPU temperature changes. Keep in mind, though, that no issue with how your CPU fan is. It can only cool your system to the lowest temperature. So if you’re looking for a new processor, take a look at our CPU Beem build based on your processing unit.